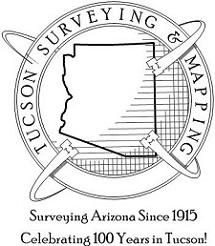 It all began in 1915 with a civil engineer named T.N. Stevens. Back in those days, civil engineers performed land surveys, and Stevens certainly performed his share. Stevens was not only a civil engineer, but also a Mineral Surveyor and a U.S. Deputy Surveyor. Unfortunately, there is no readily available “written history” of T.N Stevens, but a letterhead from 1953 confirms he established this firm in 1915. Through careful examination of his land survey records, we know that he operated his firm under the names T.N. Stevens, T.N. Stevens and Associates and Stevens, Pafford and Associates. The oldest Stevens survey drawing in our files is dated 1918, although there are several drawings without dates, that may predate 1918.

In 1959, a Mining Engineer from Wisconsin came to Tucson and bought Stevens’ interest in the firm. That Mining Engineer was John H. Stitzer, and the name was changed to Stitzer, Pafford and Associates. John soon obtained both a Civil Engineering and a Land Surveying license. Over the next 25 years, the firm name changed several times as partners came and went, but the quality of surveying services only got better.  The better quality surveying resulted in a reputation enjoyed by only a handful of surveying firms in Tucson’s history.

During John’s tenure with the firm, a young surveyor from Washington joined the team. Bill Johnson was that young surveyor and he came on board in in 1976. In 1982, Bill became a partner under the firm name of SJV and Associates. Bill continued the tradition of providing quality surveying services in southern Arizona. His efforts and those of his associates, kept the reputation of the firm as one of the most competent in Tucson. During his tenure, Bill acquired the private survey records of several Tucson surveyors, including Sidney Kain, Fritz Rollins and Tom Luckow. This has resulted in a private collection of over eleven thousand survey records. Bill was with the firm for 38 years and decided to retire in 2014.

In 2014, Steve McLain acquired the survey portion of SJV and Associates, and Tucson Surveying & Mapping was born. Steve is a second generation Land Surveyor, and a fourth generation Arizonan. He began his surveying career in 1985 and obtained his Land Surveying license in 1996. His surveying career included apprenticeship under several Tucson surveyors including Tom Luckow and G.W. McLain. G.W. McLain was considered by many of his peers as the consummate boundary surveyor. The Arizona Association of Professional Land Surveyors named their outstanding achievement award in his honor.

Steve has all the experience and expertise necessary to continue the legacy started 100 years ago. He will uphold the highest standard of both quality service, and attention to detail.  Utilizing GPS, a Robotic Total Station and a UAV, Steve will personally perform every aspect of the surveys provided by Tucson Surveying & Mapping. With over eleven thousand survey records at our fingertips, Tucson Surveying & Mapping can utilize historical records simply not available to our competitors.